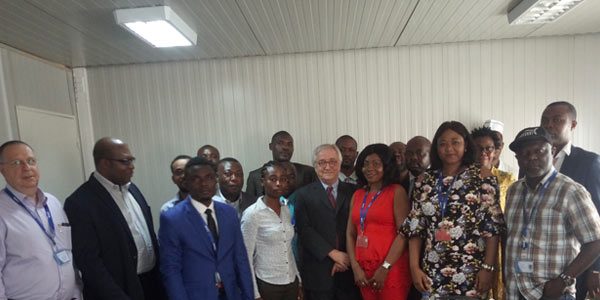 Elected on September 14, 2018, the ten staff representatives of Kribi Containers Terminal were installed by the departmental delegate of Labor and Social Security of the Ocean Irene Flore NGOUFFO TSEFO in the presence of the Director General, Daniel LALLEMAND and its principal employees.
The emotional ceremony (a first for KCT) was set in the conference room of Building A, which houses the general management of Kribi Container Terminal at MBORO on November 26th.
Before their appointment, the Director General first congratulated the lucky of the day for the trust placed in them not only by the voting staff but especially the staff of Kribi Containers Terminal as a whole. Daniel LALLEMAND asked them not to "peddle gossip" and to give the right information on the real situation of the company whose current vision is oriented towards the economic and commercial plan to rebalance its cash. Despite this somewhat gloomy situation, there is no fear of jobs and the payroll deemed high by the shareholders reassured the CEO that he will do everything possible to preserve the gains.

Following the CEO, speaking in turn, Irene Flore NGOUFFO TSEFO, the Departmental Delegate of Labor and Social Security of the Ocean, following in the footsteps of the Director General of KCT will ask the elected officials to make every effort to maintain a calm social climate for this young company that employs nearly three hundred people, one of the few in the port.
In response to these first two speakers, Word was given to RENE TCHADEU, the oldest member of this new vintage which will in turn first of all thank the general management of KCT for giving the opportunity to delegates to have the right to speak on behalf of staff, a rare initiative in start-up companies, before adding that it will be a matter for his colleagues and he to establish links of sincerity between staff and the Directorate-General for KCT's walk.
To materialize this frank collaboration, a register of grievances was given to them in order to transmit at the appropriate moments the possible grievances recorded and to find solutions in a concerted manner.